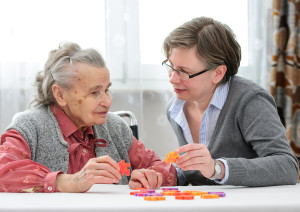 Dementia and depression can often co-occur.  It is not known if one causes the other, and much research is still needed.  To date, studies have shown that people suffering from high levels of depression prior to a diagnosis of dementia, show a more rapid decline later on in their thinking and memory.  However, as a person develops dementia, depression symptoms were found to be less.

The two share many common symptoms which can make it difficult at times to accurately diagnose.  Particularly in the early stages of diagnosis, individuals suffering from either or both may exhibit problems sleeping, difficulty concentrating or memory loss, and a loss of interest in relationships or other pleasurable activities.

In order to receive an accurate diagnosis and the most effective individual treatment plan, it is important for you or a family member to speak with your physician and share details of what you are experiencing or what they may be observing.

It is important to understand that depression can greatly decrease a person’s quality of life.  Proper medical treatment, counseling during early stages of diagnosis, attending social groups, and exercise can all help a person who may be suffering.  If a depression diagnosis is made prior to the onset of dementia, treatment may benefit a person’s cognitive abilities as they age.

Family members may also wish to seek support while caring for a loved one with dementia.  It can be emotionally and physically exhausting, so it is important to take time to care for yourself too.