November 7, 2017 By Kathryn Leave a Comment
Spread the love

iFred updates ‘Schools for Hope’ program with a rebrand to Hopeful Minds, with a new advisory team and additional lessons to address failure and rumination in young students. The program is free and available online, and initial research by iFred in the USA has illustrated that ‘The Hope Curriculum’ may be an effective means of teaching the concept of hope. Dr Karen Kirby from the Psychology Research Institute at Ulster University in Northern Ireland (NI) further tested and validated the program in a study utilizing both quantitative and qualitative methods to evaluate the effectiveness of Ireland’s first ever ’Schools for Hope’ program, sharing the exciting results: “The outcomes of the Hope programs indicate that children not only develop increased levels of hope overall, but the findings indicate that they have developed improved coping skills and belief in themselves and their abilities in particular increase in abilities to regulate emotions and develop emotional resilience skills. Furthermore, the pilot findings indicate increased confidence in their abilities to problem solve, in addition to ultimately reducing hopelessness itself. These mental health promotion qualities and coping skill enhancements means that these young people have learned life skills which will hopefully support them when facing life adversities, as they have inherently developed new tools which may prevent hopelessness from developing in the future.” 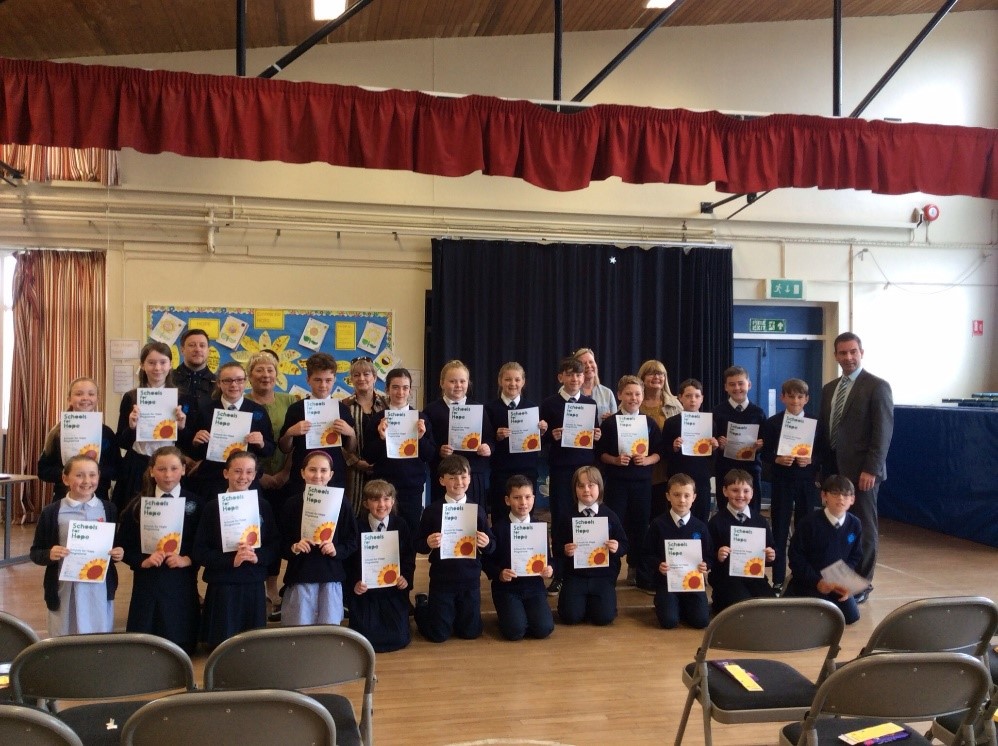 The Schools for Hope program aims to promote mental health, prevent mental illness and initiate early intervention among primary and post primary school children. The original program was developed by a group of experts with the support of Kathryn Goetzke, the founder of iFred, President & CEO of The Mood Factory, and global mental health advocate serving a number of advisory boards including Y Mental Health, FundamentalSDG, and the Global Mental Health Movement. “We are excited about our initial results in Northern Ireland, as it further validates our hypothesis that hope is teachable and provides evidence we need to attract new partners, funding, and resources to expand. We are also thrilled about our new lessons on rumination and failure, as we need they often lead to anxiety and depression if not addressed.

Depression and anxiety do not discriminate, and they are impacting our children at greater and greater rates so we must get them before it turns into an actual depressive episode or long-term anxiety. While 36% of girls in the US are identifying with depression prior to age 18, and kids now being as anxious as adults, I also believe we can and must reverse this trend. Hopeful Minds is starting to open the door to show us how to do that very thing, and I think with our strong new advisory team in place and compelling research we are equipped to make a much greater impact.”

The curriculum, previously 10 lessons, is now comprised of 12 lessons, an hour each, and available online so teachable at home, in schools, at churches, or in after school programs. The lessons teach the meaning of hope, what supports a hopeful state personally and in the classroom or groups, mindfulness, emotional self-regulation techniques, gratitude, the importance of brain nutrition, the meaning of success as the journey and not the destination, giving hope to others, how to address failure, a technique for ending rumination, and more. It aims is to equip students, educators, leaders, and parents with the tools they need to experience and maintain ‘Hope’ at the critical age of 8-10, right before depression rates are seen to increase in youth.

Guy Winch, Ph.D. joined the advisory board and wrote the additional lesson on failure and provided support for the lesson on rumination. In Northern Ireland it was clear that kids tie a hopeful mindset strongly to the outcome of grades, so it seemed the perfect fit for the curriculum. Through the lesson, Guy brings out the critical point that an ‘F’ or bad grade is not an indication that the student is a failure (as many kids feel), but instead an indication that the process to achieving the grade failed. Guy is a licensed psychologist, author, and keynote speaker. His most recent book, Emotional First Aid: Healing Rejection, Guilt, Failure and Other Everyday Hurts (Plume, 2014) has been translated into twenty-three languages and his TED Talk on the same topic has been viewed over 5 million times and is rated as the 5th most inspiring talk of all time on TED.com and we are lucky to have him on the team.

iFred worked with the ‘health improvement service’ of the Western Health & Social Care Trust (WHSCT) to adopt and pilot the initial ‘Schools for Hope’ program within primary and post primary schools in NI. The program was implemented in a unique partnership model and as an effective community planning example in action, involving the Outer West Neighbourhood Renewal Partnership (OWNRP), the Health and Education statutory bodies, the School of Psychology at Ulster University (UU) and six Local Primary and Secondary schools in the North West area. This program is now being expanded in NI under the Hopeful Minds banner with the additional lesson, and also being brought to Malaysia in the winter of 2017.

Dr. Myron Belfer, a new advisor to the project and MD, MPA and Professor of Psychiatry in the Department of Psychiatry, Children’s Hospital Boston, Harvard Medical School outlined that it is important to note that “Hope is tangible and teachable, and it is an essential ingredient for a successful life trajectory.”

Kristy Stark, M.A., BCBA, Ed.M., another new advisor and presenter in Northern Ireland, adds, “Hope is a powerful catalyst. On its own, it can support human development and move people closer to their goals. In a meta-analysis published this year (Marques, Gallagher, & Lopez, 2017), for example, it was revealed that hope predicts academic outcomes, including GPA. At the Harvard Graduate School of Education and in academic institutions across the globe there has been a steadily increasing interest in hope and other noncognitive factors in education. The most exciting development emerging from recent research is that hope can be learned.”

Marie Dunne, principal pioneer of the program and WHSCT, mental health specialist shared at the conference, “the aim of this project is to equip young people with information, knowledge and skills that will give them the personal self-esteem to nurture healthy relationships with themselves and those around them to improve their quality of life. Above all, It will also teach them to have Hope and additional skills of understanding and managing their own mental well-being and the tools with which to so’. We are grateful that Marie also helped create the new lesson on rumination, as teaching kids how to stop this negative cycle is key to creating and maintaining a hopeful mindset.

If you are interested in bringing Hopeful Minds to your church, school, after-school program or more, simply visit www.hopefulminds.org as you can review and print directly from your computer. We created the program in a way that it could be self-led and free, as we believe Hope is a Human Right and should be accessible to all. If you are interested in getting involved in helping research, fundraise, grow, do social media or create an app or work to gamify it, please contact us at hopeful minds at ifred dot org.

Be sure to also check out the recent HeroX challenge, and share your #OneThing for #Hope. 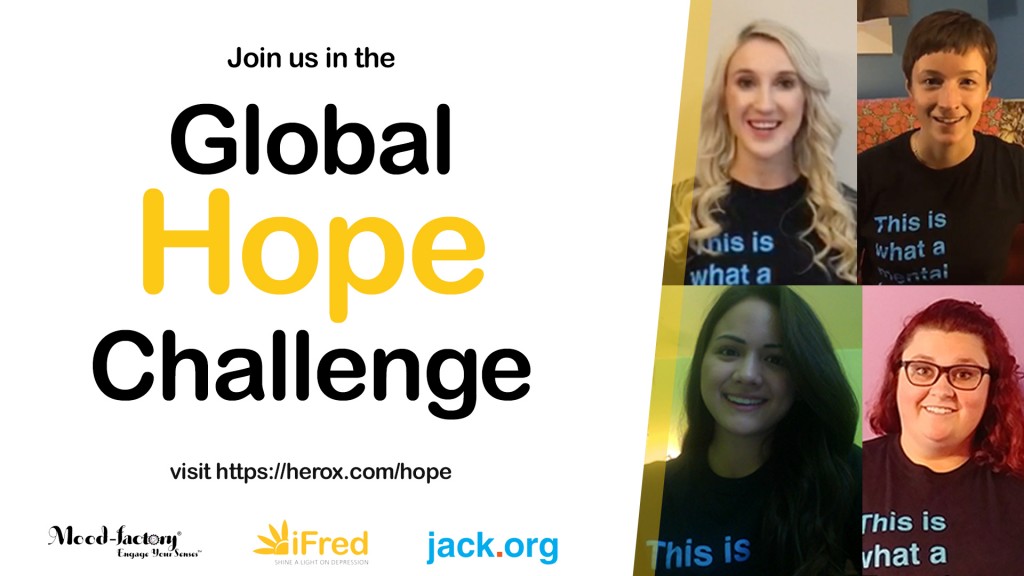 Study Design and Outcomes for Research in Northern Ireland:

Findings on the research were presented at the Schools for Hope Conference. The study design employed both quantitative and qualitative methods to assess the results of the curriculum; student responses were analyzed using standard measures and also focus-groups were conducted to allow the children to comment their own words.

The quantitative study utilized a pre-post intervention design, where data was collected before and after the 10-week Hope program. The Hope curriculum was delivered either weekly or fortnightly in four primary schools and two post primary schools in the Derry, Strabane, and Enniskillen (Enniskillen data not yet analyzed) areas. The general outcomes were very positive with a good sample size of 45.

Specifically, the younger children who took part in the ‘Schools for Hope’ program had statistically significant improvements in anxiety levels (measured using the Spence anxiety scale for children), emotional regulation levels (using the ‘how I feel’ scale), and reduced hopelessness (as measured by the Beck Hopelessness scale for kids).

The qualitative focus groups within the post primary school children, the key themes that were vocalized by the year 8 pupils were “understanding stressors and mental health,” “knowing how to respond to emotions,” “improved coping skills,” and in particular “problem solving,” and “confidence building”. They also reflected on new learning and stated the following: ‘I think that (physical and mental health) are equally important”.

When asked about whether they would recommend this program to other children, some of the year 8 pupils stated the following. “It would show them and teach them how to deal with stress” (P1) “To show them how to cope with stuff.”

The specific coping skills in which the pupils reported an improvement are as follows:
Leadership: “They would take leader roles in activities”
(P16)Team working: “Got them working with different people”
(P17) “Everybody put their input into it, it wasn’t left to one person in the group”
(P16) Coping: “How to go into your upstairs brain”
(P15) “Deep breathing”
(P15), Ways to take your mind off it”
(P15) “Cope with stress”
(P11), “How to cope through hard times”
(P6), “Breathing back from 10”
(P3), Yoga breathing
(P3), If someone calls me a name I just ignore them as I know they are just negative and they are trying to get me down
(P2) Confidence: “One of the teachers noted that she belied that the group’s ‘confidence has grown through the project”
(P17). “Before the Hope Program I never knew what to do if I was getting bullied but now I know I can go to my teachers and I know about the upstairs and downstairs brain and I feel confident now”
(P4). “I didn’t feel confident because I was going through a bit of a hard time at that time, and I didn’t feel confident as I didn’t know what to do but when John and everyone came in to show us how to deal with it, it really helped”
(P3). “Before the program I wouldn’t be able to speak in front of people, I wouldn’t be able to do that but now it has told me to breath and get on with it”
(P4) Believing in yourself: Never give up on something you want to achieve”
(P1). “I believe I can do anything that if I put my mind to it and never give up”
(P1) “That you should never stop, you should try”. ‘Like say you tried to do something and something might stop you or get in the way just try your best to overcome it or work around it”

The implementation of the Schools for Hope Curriculum developed by iFred for youth has resulted in encouraging, measurable child mental health outcomes. Hope is vital and teachable.