Kathryn Goetzke is an entrepreneur, philanthropist, strategic consultant and global depression advocate. She is the entrepreneur and innovator behind Mood-lites™, a brand that achieved over 35 million dollars in retail sales. As her role as Chief Mood Officer at The Mood Factory, her goal is to ‘Improve Moods’ by teaching consumers how to get in the present moment through engaging senses. Armed with an MBA in International Marketing, an undergraduate degree in Psychology, and over 20 years of experience with small and Fortune 100 companies, she aims to do just that with her new line of product based on how scents impact moods.

Prior to founding her own company, Goetzke, a world traveler who has worked and studied across the globe, was Vice President of Sales and Marketing for Compass Marketing. She guided Fortune 100 companies including The Gillette Company, Johnson & Johnson, Unilever, General Mills, and others in developing Alternate Channels while leading revenue growth of more than 400% for the agency. Goetzke also led the strategic planning and business development for Brazilian-based Seed Technology Solutions (SeedTS), a Sao Paulo-based technology firm, with income rising over 200% and project acquisitions with Deutsche Bank.

Goetzke began her career with 3M Corporation, where she worked as a Research Manager developing a statistical model for determining market potential of street signs at the company’s headquarters in Minneapolis. From there she moved on to expand her experience at American Express by serving in different capacities including New Products, Marketing, Research and Promotions. After her time at American Express, Goetzke moved the mountains in Montana and joined Partners Creative in the world of advertising.

In addition to launching Mood-lites, Goetzke founded a non-profit organization for depression called iFred (the International Foundation for Research and Education on Depression – www.depression.org) dedicated to eradicating the stigma of the disease using the sunflower, a focus on hope, the color yellow, celebrity engagement, and education on the biology of the brain. According to the World Health Organization, there are 350 million people around the world with major depressive disorder, yet depression is treatable and episodes often preventable. She is most excited about her new Schools for Hope initiative based on research that hope is a teachable skill and aimed at reaching 5th graders around the world so they may be equipped to always find HOPE. 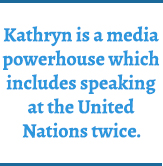 Goetzke and her work has been featured in Entrepreneur Magazine, Home, InStyle, Family Living, Scholastic Choices Magazine, and others. She has spoken at the United Nations twice, the Global Mental Health Movement Athens Conference, at Mental Health Community Associations Conference, the Scent Marketing Institute, and more. She has been featured on multiple radio and television shows including BBC, WGN Chicago, CBS Chicago, Tasty Trade, and eWomenNetwork. Goetzke is a regular contributor to the Huffington Post and PsychCentral, and writes regularly for iFred and The Mood Factory and serves on advisory boards for FundaMentalSDG and the Global Mental Health Movement.

Goetzke has a Master of Business Administration degree in International Marketing Management from the University of St. Thomas, and a Bachelor of Arts degree in Psychology, International Studies and Biology from Winona State University. She currently resides in both Chicago and San Francisco, CA, where she enjoys hiking, meeting new people, playing with her nieces, exploring the mountains, skiing, and solving complex global challenges.